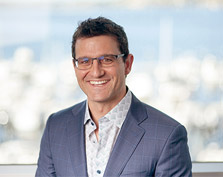 Dr Brendan Ricciardo is an Orthopaedic Surgeon specialising in arthroscopic and reconstructive surgery of the lower limb and shoulder and orthopaedic trauma.

Brendan was born in Albany, Western Australia. He attended John XXIII College for secondary school, graduating as head boy in 1996 and receiving an Australian Students Prize for Outstanding Academic Achievement. He studied medicine at the University of Western Australia and obtained his Bachelor of Medicine and Surgery (MBBS) in 2002. He commenced internship at Royal Perth Hospital in 2003 and was awarded the Goatcher Intern of the Year.

Brendan worked as a consultant Orthopaedic Surgeon in 2012 after accepting a 6 month locum position in Bunbury, WA. In 2013 Brendan completed further fellowship training in the subspecialties of Lower Limb Reconstruction, Sports and Trauma Surgery in Adelaide, SA.

Towards the end of 2013, Brendan returned to Western Australia and headed north where he worked and lived for 18 months as the sole resident Orthopaedic Surgeon in Geraldton. He started Geraldton Orthopaedics with Dr Mark Hurworth in 2014.

Brendan is passionate about teaching junior medical staff and orthopaedic trainees. He is currently an Orthopaedic Trainee Supervisor and the Director of Training for Orthopaedic Surgery at Fiona Stanley Hospital.